Faces in the Crowd is a mural painted by Nina Talbot that was created in 1990 and installed in the lobby of The Lincoln Plaza Cinemas until the theatre closed January 31, 2018. Talbot was inspired by the multiplicity of people lining up to see films in the historic theatre, which was in operation for thirty-six years. Faces in the Crowd is dedicated to the memory of Nina’s late father Daniel Talbot, who was the operator of the Lincoln Plaza.

The mural is now in it’s new home at The Judson Church.

Nina Talbot is a painter whose work has been seen in numerous museums locally and internationally. Her work is organized into series that document the lives of people from the neighborhood and across the globe. 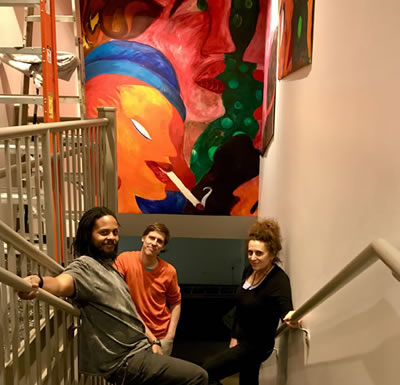 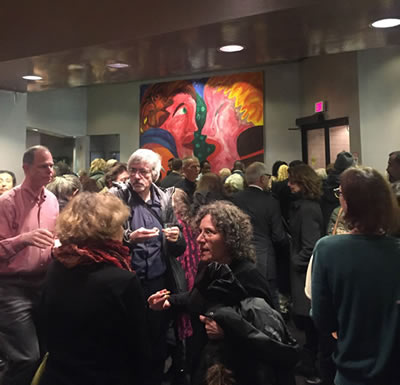 Faces in the Crowd mural, in its original location on last day of the Lincoln Plaza. Photograph courtesy of Maria Dominguez.

Coverage of Talbot's Faces of Dynów exhibition at Zamosc Synagogue December 2016 - January 2017
The Foundation for the Preservation of Jewish Heritage 2016 annual report, pgs. 29-30.

Faces of Dynów: Portraits and Stories from an Ancestral Town in Galicia
Artist/genealogy talk at the Jewish Genealogy Society of Long Island

Artist Nina Talbot’s genealogical research led to the creation of a painting series, Faces of Dynów, depicting the lives of people from that Polish town from the 1920s through the present day. A book, also titled Faces of Dynów, was published in conjunction with the exhibit, which has been shown in Kraków, Zamosc, and Dynów, Poland. In addition to doing online research, Nina visited archives in Israel, Poland, and New York and interviewed descendants of her Neger and Spinrad families in the U.S. and abroad. She will discuss both her research and her art work in a talk illustrated with images, archival records, photographs, and audio clips of some of the interviews she conducted. 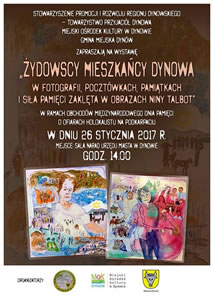 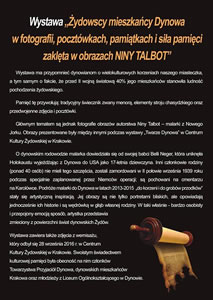 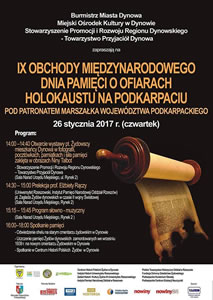 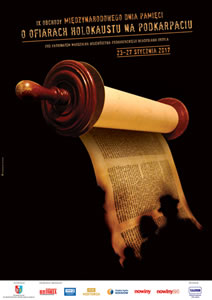 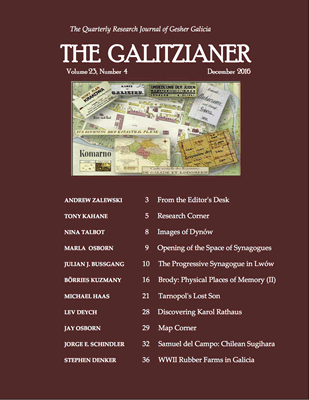 Talbot's exhibits covered in the December issue of The Galitzianer, The Quarterly Research Journal of Gesher Galicia 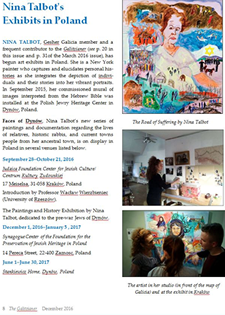 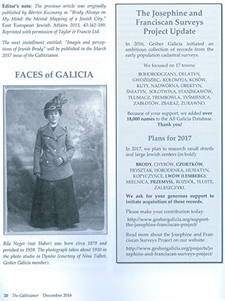 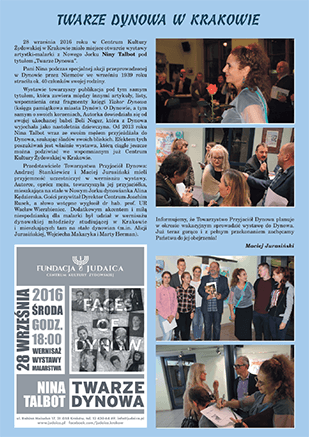 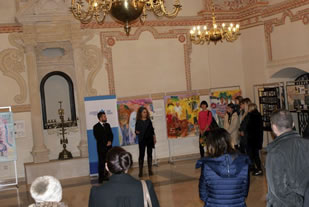 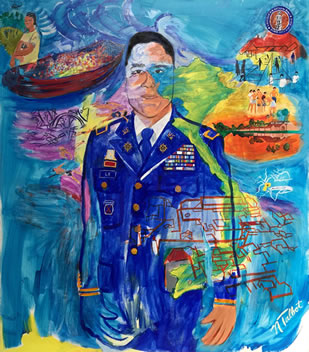 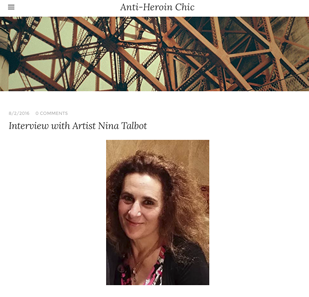 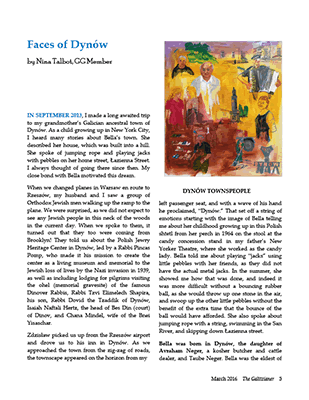 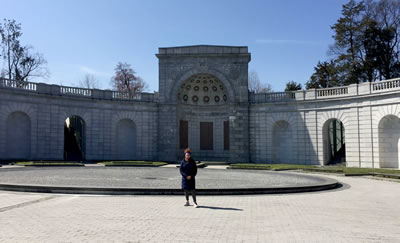 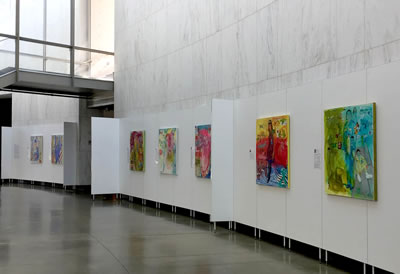 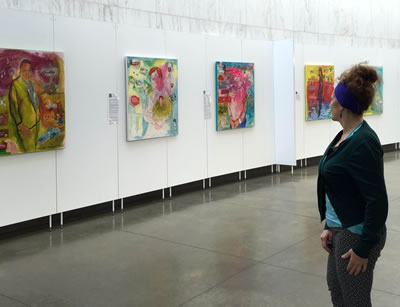 OUR WOMEN VETERANS – By Nina Talbot
Women In Military Service of America Memorial
at Arlington, VA

In her new series of paintings entitled Our Women Veterans, artist Nina Talbot presents twelve portraits of American women Veterans, superimposed on images of their private lives, and of their rarely told personal stories. By using translucent layers of paint, the artist portrays the women’s’ faces on a background of their memories from their lifetime - moments from their lives before service, events they experienced in life in the military, and life after deployment. The artist’s work is driven by her intimate conversations with the Veterans. Collaborator Sophie Rand wrote the stories based on Talbot’s interviews with the Veterans.

The words of the women are placed in the writings hanging next to the paintings. Joan A. Furey, for example, a nurse who served in Vietnam, stated, “You’re aware of the awful price that’s being paid,” a message that serves as a wake-up call for the civilian viewer of the image, who may have little appreciation of the depth of sacrifice of the Veteran.

Through stories from a wide variety of subjects the viewer is transported to scenes in Afghanistan, Iraq, Cuba, Somalia and Vietnam and our military bases within the United States. In these paintings we see how the women Veterans’ identities are shaped and defined by their military experiences. Sarah Mess, for example, a Veteran of Mogadishu, tells of her life since her service in Somalia-“You can’t unknow what you know.” This series of paintings also tells us that to understand women in military service, we must understand the experiences of the individual women who served. JoAnn Session, a U.S. stateside Veteran passionately stated, I wanted the challenge. I wanted to train, spy, sniper, jump out of planes.

Our Women Veterans is a “visual oral history”, and it is an appreciation, recognition, and communication of the lives of our women Veterans. The paintings work to bridge the gap between civilian and military life, so that the public can appreciate Veterans’ struggles - in particular women Veterans’ struggles - and give proper recognition. Brigadier General Wilma Vaught states, “It’s just a history that needs to be recorded and told. For many decades it wasn’t being recorded, the memorabilia wasn’t being collected, and now it is. And it’ll be here hopefully for all time.” The paintings and stories convey the pressing need for a civilian understanding of the realities and experiences of Veterans from current and past generations. 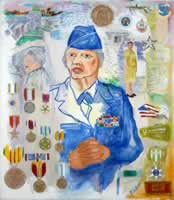 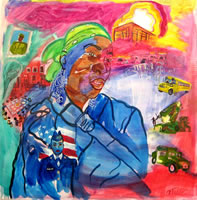 These portraits by Nina Talbot, depict the stories of her ancestors who lived in the historical town of Dynów. The paintings are a product of Talbot’s trip to Dynów on Rosh Hashanah of 2013. While the initial goal of her trip was to investigate the emigration of her grandmother Bella from Dynów to New York City, what Talbot encountered was a town living in the shadow of a massacre of Jews that took place there at the hands of the Nazis on the second day of Rosh Hashanah in 1939.

Talbot’s discovery of the twenty-nine names of her murdered great uncles, aunts and cousins imprinted on the wall of the sanctuary in the newly built Jewish Center Dynów catalyzed a new focus of the trip toward rediscovery of the lost lives. Confronting the loss of so many lives made Talbot realize "My grandmother left first, and that's why I'm here.” This work presents an inner point of view from Talbot's family that gives the viewer a path to wander down and meditate upon their own reflections of their histories. Talbot weaves the faces, places and family relationships into her complex, yet hopeful portraits of the vanished Jews from Dynów.

Four prints from the paintings are on permanent display and gifted to:
The Polish Jewry Heritage Center
Lazienna 70 36-065
Dynów, Poland 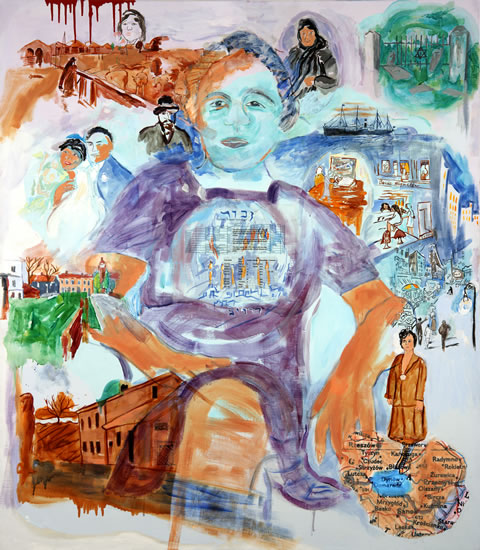 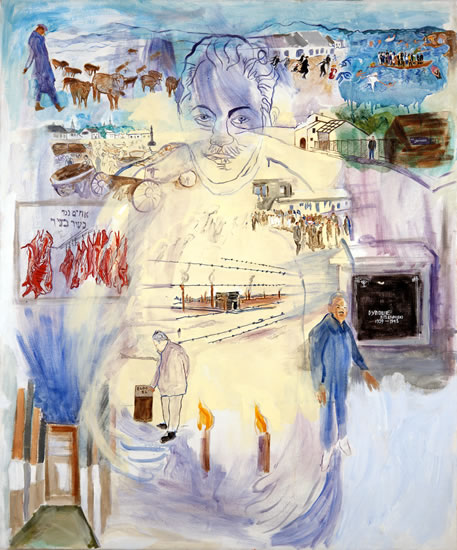 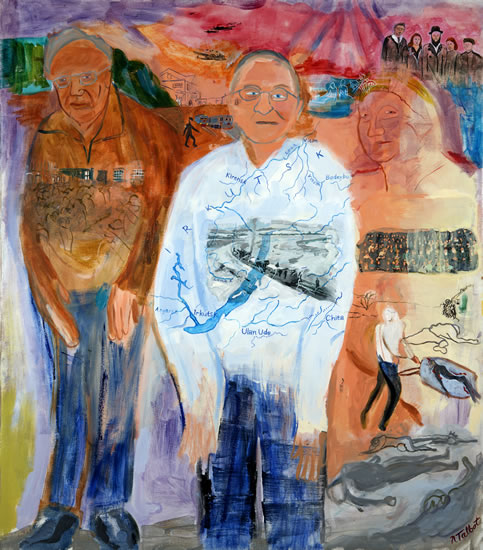 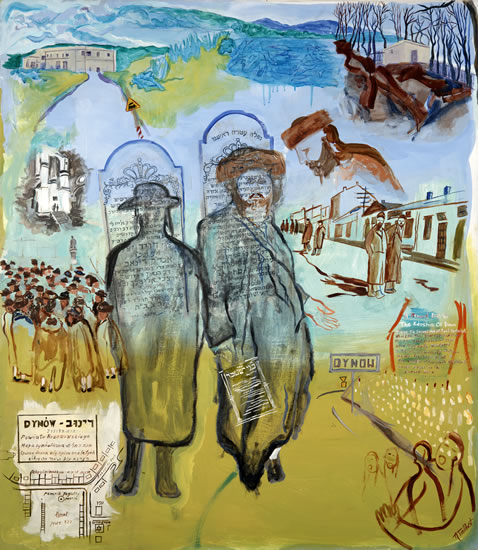 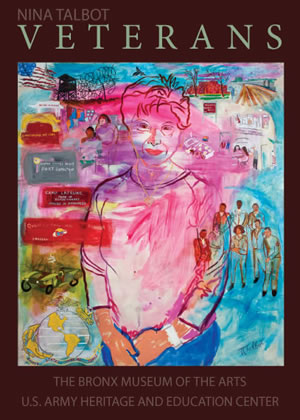 VETERANS
paintings by Nina Talbot
with stories by Sophie Rand

Catalogue available, published in conjunction with the exhibition.
Nina Talbot Veterans series of paintings with stories by Sophie Rand based on Talbot’s interviews with 20 American war veterans. Introductions by Dr. Robert Jay Lifton, author of Home from the War: Learning from Vietnam and Veterans and Death in Life: Survivors of Hiroshima, and Dr. Nancy Sherman, Professor of Philosophy and Fellow of the Kennedy Institute of Ethics, Georgetown University, author of The Untold War: Inside the Hearts, Minds and Souls of our Soldiers, and Stoic Warriors: The Ancient Philosophy Behind the Military Mind. Signed by Talbot and Rand. 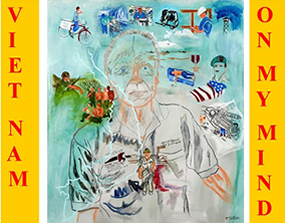 VETERANS series is travelling to The Puffin Cultural Forum 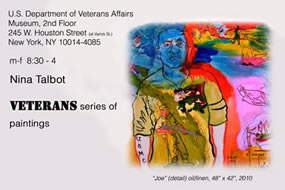 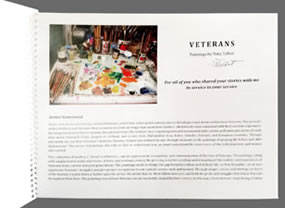 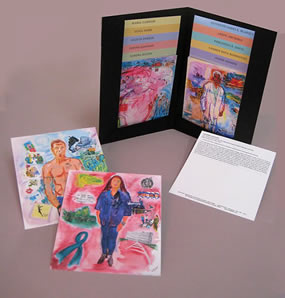 VETERANS,
A mini portfolio of ten cards with images from corresponding exhibit of paintings by Nina Talbot and stories by Sophie Rand 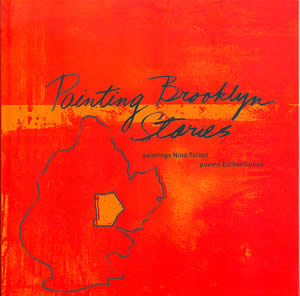 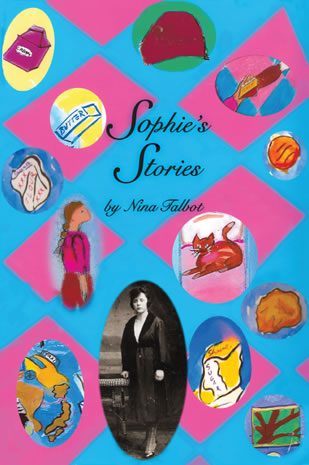 A children's book written and illustrated by Nina Talbot

A young girl investigates her great-grandmother’s life, and in the process learns about the many other lives of immigrant workers in the local supermarket when she and her mother shop for the ingredients for her great-grand-mother’s recipe for cookies. Sophie comes away with a lot more than the ingredients for the cookies; she has learned histories of real people from around the world.